There’s a group of guys I’ve been meeting with on and off for about seventeen years now. In that time, guys have come and gone (including me, on both counts). There have been children, grandchildren, and deaths. There’s been promotions, job losses, health issues, triumphs, laughter, and even anger sometimes.

There are lots of things I’d rather do on Saturday morning: sleep, write, run, even do nothing. But the time I’ve spent with these guys has been worth all of it.

One good thing today is a group of people you can always count on.

Skyping with my daughter half a world away on Christmas. Best Christmas present of the year, by far!

Not a Christian nation????

It came up in conversation that someone said this country is not a Christian nation.  The person who spoke of it was angry at the statement. I respect this person an awful lot. He’s a good person.

First, the main point. This is not a Christian nation. Statistically, it has more Christians than any other religion–that’s true. But in terms of its make-up, this is a free nation. You don’t have to be Christian to live here. You can be Jewish or Muslim or worship the flying spaghetti monster. You’re free to worship or not worship as you choose.

Some will say that this country is increasingly antagonistic to Christians. While that may be true, there isn’t anyone in this country that faces loss of property, family, freedom, or life simply for worshiping their God. No one cuts your head off. No one puts you in a cage and lowers it into a pool. There are countries where all of that happens, but this isn’t one of them.

And in that, this country is particularly God-like. God gives us free agency. Ultimately, we can choose him or not choose him. As my pastor says, God is a gentleman. If we don’t invite him, he won’t force us. That’s our choice. If we turn to him freely, rather than out of obligation, we are exercising love, not obligation.

And that’s why this non-Christian (please not, I’m not saying unChristian or antiChristian) country is the perfect place to practice. Because in this free country, we can freely exercise love. We aren’t required by force of law to pretend to love. We aren’t forbidden by law from practicing that love. We get to choose–choose God and choose to love others. And others are free to accept or not accept our ideas about God. It means we have to actually practice the love and be the light. Society isn’t going to try to enforce it for us. We have to do attract people by our actions.

In being able to make those choices, we are particularly blessed.

It’s up to us to bless (or not bless) the people around us.

The freedom to choose to bless the people around us.

Some days, you feel like you just want to pop on Katrina and the Waves (if you’re old, like me, and you know that band) and dance. (By the way, Katrina was wicked sick the day they shot that video.)

Some days, your mood is captured better by this classic from Edie Brickell’s husband and Art Garfunkel.

Everyone has days when they feel like Paul and Art, where the fortress deep and mighty feels necessary and oppressive and when darkness falls like a suffocating blanket of toxic snow. That doesn’t mean you lack God or value or people who care. It means you’re human. It means that it’s not realistic to expect yourself to see the world as an infinite supply of puppies and kitties and bunnies

If you expect that, or try to hold yourself to that, then you’ll be annoyed at life and you’ll add a layer in which you’re annoyed at yourself for being annoyed.

So accept that every day isn’t a freaking bundle of daisies. Let it go and eventually*, it’ll pass. (* — If it doesn’t, please get to someone who can help you with that. Not getting help is like not wearing glasses because there’s a stigma attached to corrective eyewear. Glasses can be super hott, speaking metaphorically, of course.)

A lit Christmas tree early in the morning when no one else is up.

Last week, MSNBC host Melissa Harris-Perry shined the big flashlight of racism on Star Wars, specifically on Darth Vader. Her problem with Vader was that while he was bad, he was basically a black guy–James Earl Jones. While he was good, he was one of three white guys–Jake Lloyd, Hayden Christiansen, and Billy Joel…err, Sebastian Shaw.

I suspect James Earl Jones, always a vocal bad ass as an actor, was okay with this, as he made more money as a result of Vader than any of the other Vaders, including David Prowse, who was the man behind the mask. James Earl Jones has one of the baddest-ass voices in the history of bad-ass voices. Who’s Darth Vader going to be? Christopher Walken?

I bring this up because we’ve spent a lot of time this holiday season talking about stupidity concerning Starbucks Christmas cup complaints brought on Twitter by a Christian pinhead with access to a computer.

Melissa Harris-Perry, at least in this case, is a liberal pinhead with access to a network news show. She has a level of influence that the Starbucks pinhead could only dream of.

The overall point here is that there’s a growing movement toward the (NFL Commissioner Roger) Goodell rule (if one person is offended, we have to listen). That kind of nonsense, whether it comes from Christians with way too much time and money to buy crappy coffee, or from network news hosts who would call the most iconic character in the history of science fiction (sorry, Spock) racist, has to be called out.

So Melissa Harris-Perry, in considering your opinion of intelligence of the people who will be going to see Star Wars over the coming weeks…

Fictional universes you can lose yourself in.

For this moment at least, I am a leaf on the wind.

After the super dark and dreary days of May, June, and July–and a repeat in the fall, things are pretty decent now. My health issues are smaller than the were and I’m taking some halting steps to regain a part of a normal life. In short, it’s better than I considered possible a few months ago.

But another part says, “The last guy who said that got impaled by a harpoon, just after he said it.”

Put another way, I have a bottle of champagne on my counter awaiting December 31. My plan wasn’t to drink it at midnight to toast in the new year. I was going to drink it at, say, nine, to help wash away 2015.

Instead, maybe I’ll drink it to toast what was done to overcome obstacles in 2015. This year was hard, relative to previous years, for me, at least. (Though if I’ve learned anything this year, it’s not to assume that your hard is anything relative to others’.) This year strained me to limits I didn’t know possible, and other people along with me.

Yet here we are.

So I think I’ll drink to us, for being here. For the bruises we endured and the scars we now have as a result of the things that happened. I’ll look back on this year, not with relief, but with admiration for what was done, and the conditions that were endured.

And I’m not going to look forward with anything. That’s the lesson of Hoban Washburne. You can celebrate your greatest triumph, only to be impaled be reavers in the next instant. This past is what it is, and you have to find the good in it. The future is unpromised. So find something good and toast it now.

Sorry, but I have to do it. Firefly is a big fat barrel of fun.

One good thing, #38. The naked cowboy

A while back, I was in New York for a work event. In order to get to our destination, we had to walk though Times Square. And there we saw….<drumroll, please>…the naked cowboy. 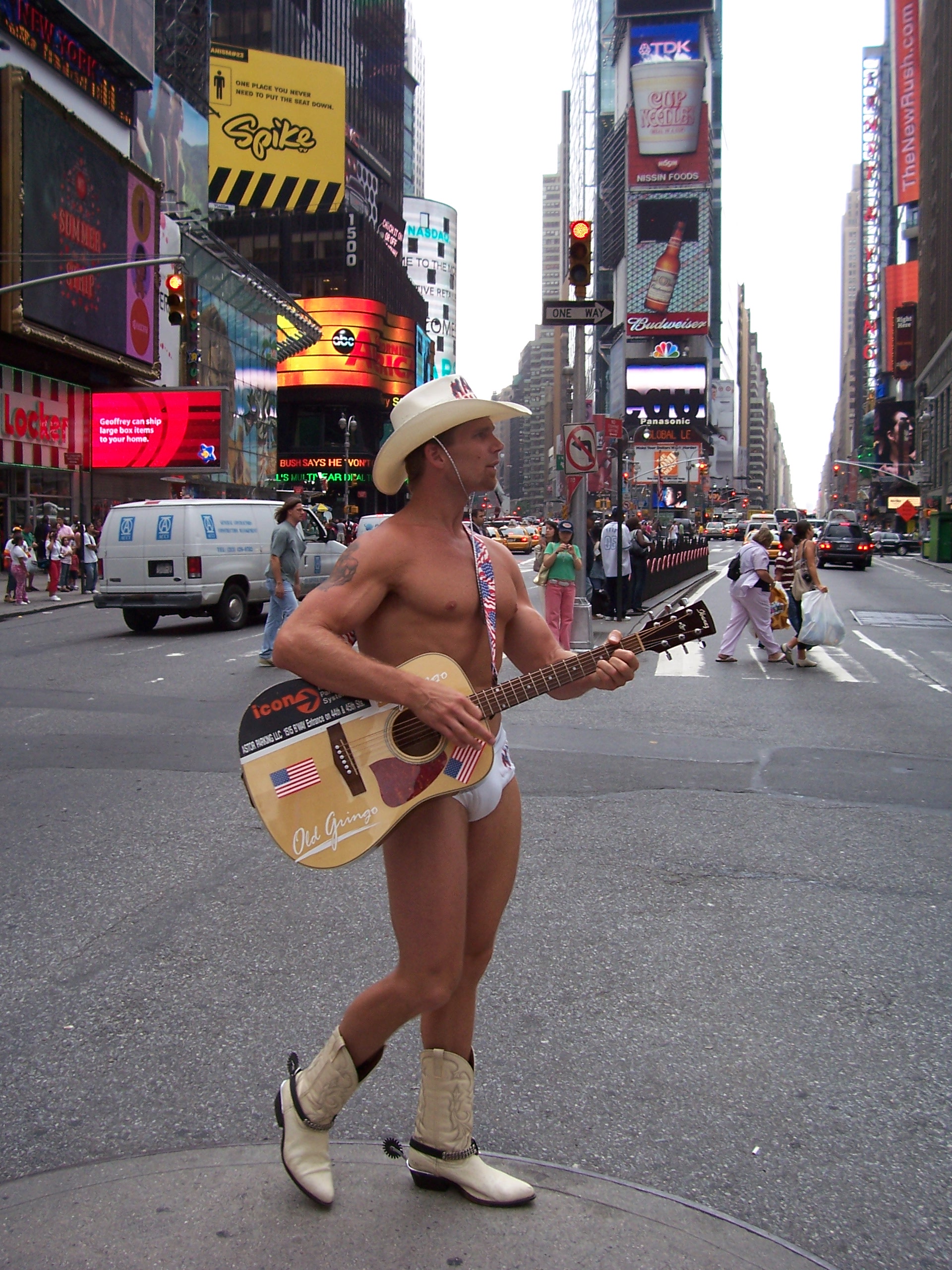 The naked cowboy really isn’t naked, probably especially not this time of year. But as we walked through Times Square, there he was, with his guitar, his boots, and his underwear, strategically hidden by the guitar.

And people were smiling and walking up and talking to him. It seemed like a good time. Plus, he’s pretty buff, so the women enjoyed it.

So here’s a guy who took a big chance by showing up at Times Square in underwear and cowboy boots and through  his uniqueness, he’s building some good feelings.

There are worse ways to live.

I went to church this week, and to a couple small groups. And I read the Bible each day. And wrote about it. (Just now, in fact.)

Odds are, you didn’t.

Which is all quite awesome, if you think about it. I can go to church, but you don’t have to. No one is making sure we go to the right places or do the right things or, more important, don’t do, say, or experience the wrong things.

There are places in the world where you get killed for attending or not attending, where you get disappeared for expressing the wrong things. This isn’t one of them.