Twice in the space of three days, I was hit with the theme of everybody belongs. It could be coincidence or it could be God pointing something out. Either way, it resonated.

Mirabai Starr, a Christian (I think) mystic, has been asked about the challenge related to the Biblical verse in which Jesus says I am the way and the truth and the life, and that no one comes to the Father except through him. If that’s the case, what about Jewish, Buddhist, Islamic, or even atheist people who live a good life and embody what Jesus asks for? What about my agnostic friend who is going through an extended rough patch with grace and empathy that shines as a model of what Jesus asks for?

Are they to be cast into the fiery pit merely because they didn’t say The Prayer™?

According to Ms. Starr, the answer is no because God is love and Jesus is God and love is, indeed, the way and the truth and the life. If anyone has cause to be angry with God, Ms. Starr is among them, having lost her 14-year-old daughter to a car accident in 2001. Sometimes hurt(adj) people hurt(v) people. And sometimes the pounding of the pain softens their soul, as if were a tenderized delicacy that would, against expectation, melt in your mouth.

When the concept of everyone belonging came up, I mentioned how some exclusion is more acceptable–such as the derision of black conservatives by liberals as traitors. A woman I know–a kind and generous woman with a soft heart–said black conservatives make her so angry she wants to just smack them (metaphorically). Even soft hearts have hard spots.

A couple of days later, after playing a video clip that called out President Trump and, by extension, the people who voted for him and believe in him, at the Joshua Tree concert, Bono doubled down on the colors bleeding into one by saying that all people, right and left, Democrat and Republican, have a remarkable capacity for kindness and generosity. And that everybody belongs.

So when everybody belongs, how do you deal with the people who don’t agree? Do they belong? How do you reconcile their beliefs that they don’t belong? Whether they are black conservatives or homosexuals or Democrats or Republicans or whoever? How do you reconcile the people who want to exclude them when everyone belongs? Do you exclude the excluders? Who decides? And who’s left after all the exclusion is done?

Earlier this week a man was stopped from a massive assassination of elected officials by sheer luck. If Majority Whip Steve Scalise and his security detail hadn’t been at that ballpark, a lot more people probably would’ve died.

Last night someone drove a truck into a crowd outside a mosque in London–a city that has more than its share of hurt people hurting people.

The answer to these attacks isn’t to debate which side’s shouting rhetoric is worse.

I’m more or less conservative. “My side” is the one that talks about second amendment remedies. It’s the one from which people showed up at Obama rallies armed to the teeth. “My side” has more than its share of bullies. But it isn’t alone.

In the Bible, Elijah was weary from the way things were going and he needed something to touch him. So God came. But God wasn’t in the earthquake or the fire or the storm. He was in the whisper.

At one point in the concert last week, Bono asked for the lights to go down, then asked for everyone to get their phones out and turn on their flashlights. One phone in a crowd of 60,000 was no big deal. But when everyone got out their phones, we didn’t need the harsh stadium lighting. 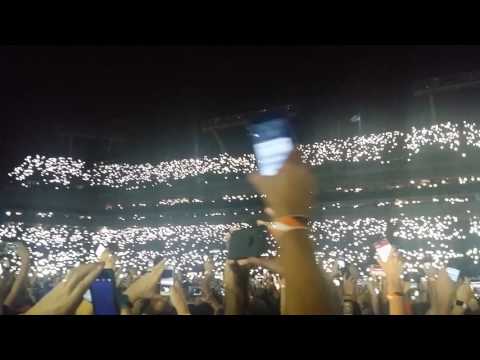 And then this morning, a guy shot up a Republican softball practice this morning. The shooter, James Hodgkinson, was killed. If you look at his Facebook presence, he’s a hard-core “Bernie or bust,” guy.

A Facebook friend describe her viewpoint this morning as “bleak.” A Facebook friend of hers said that “The best resistence to the powers of violence, death, and despair is laughter. Evil is prepared to fight righteousness. It has no idea what to do with joy.”

The evil on display wasn’t socialism. It wasn’t the Republican Party. And the ultimate evil wasn’t Hodgkinson.

The ultimate evil is the force that would steal our joy. It’s the requirement to not just disagree with people on the other side of an issue–but to build a righteous rage around it.

The ultimate evil is to see the people we disagree with as them.

In the last couple of weeks, I’ve seen people on both sides, including someone associated with the Trump administration, imply that “they” are somehow less than human.

If you look up love in any dictionary, it doesn’t mean agree with, support, or condone the positions of. It’s harder than that. It means that we have to work really hard to view them as special, as one of God’s precious children.

It’s really, really hard. But it’s more necessary now than it was yesterday.

I belong to a Facebook group for The Leftovers. The problem is, now there’s another group dedicated to friendly discussion of The Leftovers. The supposed shortcomings of the third season were apparently so massive that it became impossible to relate to people whose lives weren’t greviously affected.

By a television show. In fairness, the show resonated with a fiercely loyal fan base (except when it didn’t). But it was a television show. It was a limited-engagement by a bunch of people who are exceptionally good at pretending for other peoples’ benefit.

And yet, if you don’t condemn the third season and everything it stands for, you’ve failed a vital litmus test.

Snowflake is a popular word these days, used to call out people are so victimized that the very presence of a different line of thought constitutes an existential threat.

It’s typically used by the right to criticize safe zones and the like. Many of them are the same people who vigorously objected when Megyn Kelly dared ask then-candidate Donald Trump a difficult question about his relationships with and references to women.

Mr. Trump’s response was breath-taking. He became offended–vigorously offended–that such a question would even be verbalized. In the next breath, he bragged that he didn’t have time for political correctness.

With all respect to those who support the President, difficult questions and criticism come with the job. To be so obvious in your inability to weather that storm makes you a–dare I say it?–snowflake.

It’s prevasive, born of a culture where you can seek people and information that re-enforce your view of the world, then hold up what you’ve sought out and found as proof that you were right.

The questions of national and international politics are a serious matter. The decisions made today are vital to what tomorrow will be like. But when a mere disagreement on political policy is enough to call a person’s worth into question, maybe it’s time for some political Sanka.

We’re not talking about bringing back lynchings or counting blacks as three-fifths of a person. We’re talking about substantive disagreements on issues like health care, immigration, and the balance between the economy and the environment.

These are complex issues without simple one-size-fits-all answers. The discussions we have about these issues are as important as the decisions we make at the end of those discussion.

They simply disagree with you.

That’s what happens in a free society.

Maybe instead of insulating ourselves from it, we should celebrate it.