About the entire Kavanaugh mess (and related issues)

I never sexual assaulted anyone during the 80s. Like any guy my age, though, I was interested in exploring the other sex and, yes, I saw them as an end to a sexual means. I was hardly alone in that regard. I knew a guy who had one pair of women’s underwear hanging on the living room wall of his apartment for each woman who made it to his bed. I found that distasteful.

There was a woman in her 30s who told me, as I worked one day, that if she weren’t with a guy, she’d show me what was what. (I was of the age of consent.) Being of that age, I stocked the milk one day musing over ways to figure out how to arrange a horrible accident for a certain guy… 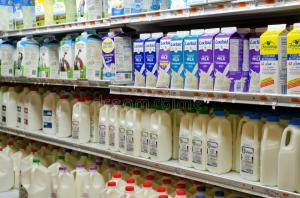 Before I go further, I want to be clear. No means no. Women are not sex objects or male property. Rape and attempted rape are wrong, both criminally and morally. And when a person (for it happens to guys, as well) is sexually violated, it leaves deep and lasting scars.

I want to also be clear that I believe Dr. Christine Ford about what happened in 1982. I believe that she told her therapist about it. I believe that she wanted two doors in her master bedroom because of her scars. I believe the FBI should investigate. I believe that Brett Kavanaugh, at the very least, owes us an explanation about his views on women in 1982 and how they’ve changed. And I believe if it ever comes out that Dr. Ford was less than truthful, there should be a heavy price to pay. 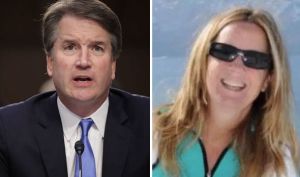 I also believe Kathleen Willey and Juanita Broderick. I believe that Rep. Keith Ellison has been accused of domestic abuse twice–once in 2006 and once this year. His ex-girlfriend, Karen Monahan has brought forward medical evidence that should at least compel further investigation.

I also believe that when you take political donations from Harvey Weinstein while his abuse of women was considered an open secret in Hollywood makes your claims of a “War on Women” a little questionable.

I also believe that people who oppose Roe v. Wade are no more likely than those who support it to rape or sexually abuse women. Harvey Weinstein and Leslie Moonves are both very likely to heavily support Roe v. Wade. (Several people in my Facebook feed have said it’s more likely that Kavanaugh abused Dr. Ford because he opposes Roe v. Wade.)

I believe that Brock Turner made his own bed and that his own actions should dictate his future. His case was a horrible miscarriage of justice.

I believe that in general, if men don’t sexually abuse women, they won’t be accused of it.

I also believe that even if 999 of every 1000 women who accuse men of rape or sexual assault were actually victims, it doesn’t mean that we don’t need to treat the 1001st case as an individual event with its own circumstances and evidence. The Duke Lacrosse team was everything the stereotypical rapist is supposed to be: young, male, powerful, privileged, and pampered. And they were assumed to be guilty. The Lacrosse team was disbanded for the season. Its coach was fired. And guys like Reade Seligmann, Collin Finnerty, and David Evans were public enemy numbers 1, 2, and 3. And the accuser, Krystal Mangum, made it up. District Attorney Mike Nifong saw it as his path to power. 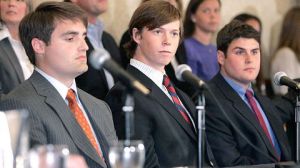 And the accused weren’t guilty.

Whenever possible, we shouldn’t adjudicate sexual assault charges in the public. We like to think we know enough about the cases, but we really don’t. The accuser and accused deserve that much. When the results are known, justice will be served and people will know. In this case, both Dr. Ford and Brett Kavanaugh have became political bludgeon’s. Both parties and their families are receiving death threats.

In such an environment, justice is severely unlikely to be served.

The McCains, Donald Trump, and us

John McCain went through fighter jets like Donald Trump goes through wives. He was one of the Keating Five (along with John Glenn), during the Savings and Loan crisis. And no matter what your political leaning, he probably angered you at some point.

He also spent five years as a prisoner of war, where he was tortured to the point where he couldn’t raise his hands above his shoulders. He went through things that we can only imagine. And he did so in spite of the fact that he had a free pass to go home. He stayed because it was wrong for him to leave while others didn’t have that option. 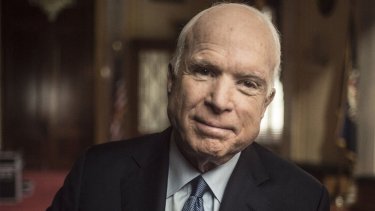 That, regardless of the other stuff, is enough to deserve respect. From the leader of our country, he deserves a hell of a lot more than “I like people who weren’t captured.”

Yes, there were several allusions to President Trump during the service at the National Cathedral yesterday. They weren’t crass or profane, but they weren’t difficult to decode. McCain’s daughter Meghan was most direct in one her comments.

“We gather here to mourn the passing of American greatness, the real thing, not cheap rhetoric from men who will never come near the sacrifice he gave so willingly, nor the opportunistic appropriation of those who live lives of comfort and privilege while he suffered and served.”

That’s one sentence of a lengthy eulogy that spoke about toughness and love–love for a family and for a country. It was barely material in her complete eulogy. It was a daughter defending her father.

Meghan McCain, like her father, isn’t a slave to political ideology. She leans conservative, but supports gay marriage and sex education beyond abstinence. She appears on The View and has mixed it up with Ann Coulter and Laura Ingraham. For this and other apostasies–and for her visible view in light of her father’s death, she was greeted with this post on Twitter. 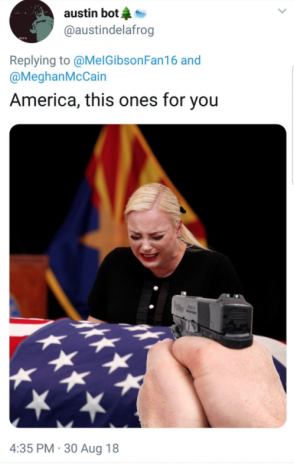 Sure, Mcghan McCain is a public figure. Sure, she’s political. And sure, she’s probably bent some feelings. But she’s also a woman mourning her father’s death. And a citizen in a free country. Threats, or implied threats, for exercising that freedom aren’t appropriate.

The America I believe in is a land of liberty and a land in which Christian ideals–you know, that love one another bullcrap–is something we strive for, knowing we’ll always fall short. And knowing that others aren’t required to view God the same way we do.

At its best, this is not a land of bullying and brute force. It’s not a land in which you encourage your followers to threaten someone’s life because they see the world differently than you do. It’s not a land where people should have to wonder if someone’s going to try to kill them during their eulogy for their father.

Whatever comments were directed at President Trump during the past week are taps on the cheek. They’re the kind of criticism a man of power and class should brush aside as if he didn’t feel them.

Threats to those who think differently have nothing to do with freedom. They’re the farthest thing from the ideals on which this country was created. They’re antithetical to the uneven, difficult experiment we’ve been for almost 250 years.

Unfortunately, the man who currently claims to be our leader doesn’t believe in the best of this country. He believes that they only way to maintain power is to invent enemies and create a siege mentality. Us against them. And anyone who ain’t completely us is absolutely them.

As a Republican, as a guy who sort of digs this country and the freedoms we are granted as citizens, I couldn’t disagree with him more.