I rolled out of bed this morning lamenting the fact that within a couple hours, I would be soaked as if I were hosed down and tired. In case it hasn’t echoed enough through the halls of this hallowed blog I hate running in Florida in the summer!!!!!!!!!!!!!!!!!

Seriously, I bought some socks that were thicker than normal socks, more comfortable and absorbent. They’re typically still wet the next day, and I run early in the morning. And that’s just my socks.

Don’t get me wrong–I like to run. But as the calendar creeps by, especially after all that happened last year, the heat just kicks my ass. Not my butt. Not my heinie. It kicks my ass.

So that said, when I can do DVDs or join a gym for ten bucks a month, why oh why am I subjecting myself to something I hate, something I dread?

Because this year, I can.

The run this morning was workout #107 since I started to keep track back in March. I don’t number the workouts so I can be the male equivalent of the What’s your excuse? woman. I number them because if I had Myalgic Encephalomyletis (ME)–Chronic Fatigue Syndrome–I could crash again any day. It happens a lot and if you crash a second time, you typically don’t get to crash a third time.

So this morning was the 107th time I got to run without crashing since I started to keep track again in March. It was the 107th blessing bestowed upon me by the God I try real hard to love and honor.

I could be wrong on this, but I don’t think God has a plan where He orchestrated my inexplicably getting sick, then inexplicably getting better. I think his plan was more to help me understand that I wasn’t alone–I’m not alone–and that I’m not expected to be omnipotent. That’s Someone Else’s job.

Positive thinking isn’t my strong suit. My thought processes run deep. They’ve been etched deep into my mind by decades of repetition–by self-fulfilling prophecies and the New York Jets.

So in terms of what I’m doing right now, it’s not the running that’s hard. After all, that’s over in-at most so far, an hour and a half. It’s the traveling outside those deep ruts of habit. It’s forcing myself to think a different way. It’s looking forward and not back. It’s making me travel beyond what makes me comfortable into a new thought process that’s daring and demanding and understanding that it’s okay to fail.

It’s believing the mediocre philosopher Don Draper, who said about failure, “You’ll them them it didn’t work out, because it didn’t. And you’ll tell them it the next thing will be better, because it always is.” 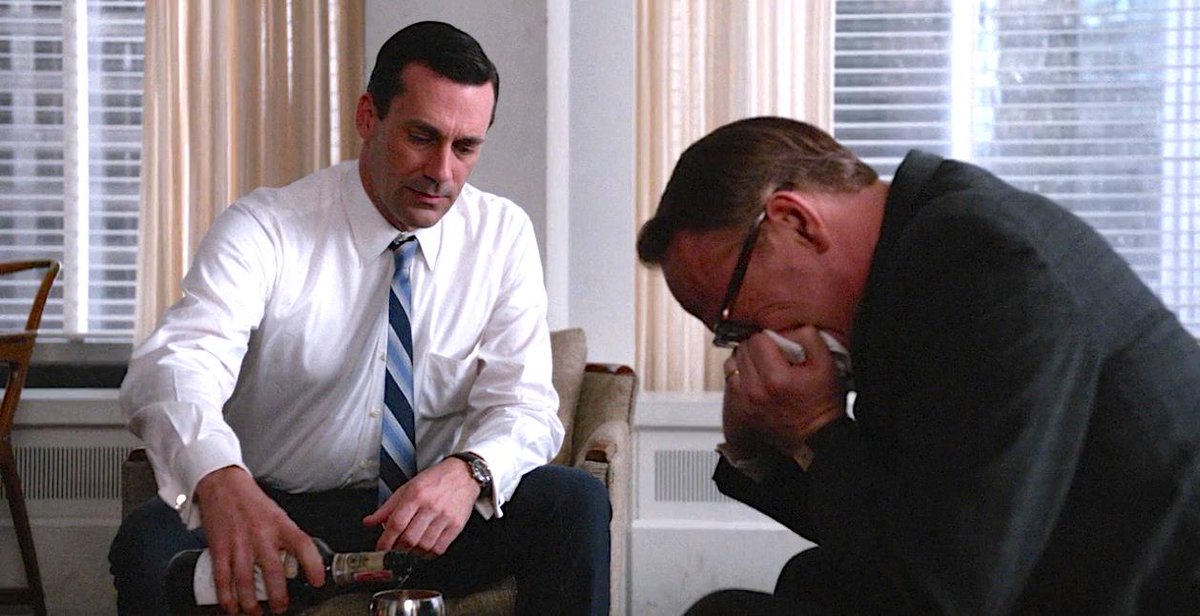 On Mad Men, the man who received that advice decided to hang himself.

And that’s really the choice isn’t it?

Giving up is easy. Looking forward, learning from the past, forgiving yourself for your supposed mountain of sins, and moving forward for your good and that of everyone around you, that’s the hard work.

After the latest news…

And in the latest unbelievable act of human carnage, a mentally ill German 18-year-old inspired by mass murderer Anders Breivik used a Facebook post promising free food to lure teenagers to a McDonalds. Then he loaded up and started firing.

Nine people. To echo the words of sportscaster Jim McKay from almost 44 years ago in the same city, “they’re all gone.”

I recently read about a black woman who went to work after one of the recent racially tinged shootings and wanted very much to talk to someone–anyone–about it. She felt like maybe one of her white colleagues could have maybe said something. As a white guy, I don’t know what to say. I wouldn’t know what to say to a gay colleague, either, if I were to see one immediately after Orlando.

Orlando seemed to hit hard. Maybe because it’s close by to Tampa. Maybe because I know some people who might’ve gone to a club like Pulse. But the fact of the matter is, I’m not gay. I’m not black. I’m not a police officer or French or German. And yet, with each horrible event, a lot of people who are none of those things feel diminished, if only a tiny bit.

If you’re gay or black or a cop, I have to imagine that you feel more than a tiny bit diminished. (I phrase it that way because I don’t know. I wouldn’t presume to know. I can only imagine.)

This isn’t about politics. It’s not about whether this group is wrong or that group is out of control. It’s about people who are hurting. And honestly, maybe its time to put aside your concerns about the “gay mafia,” or who’s behind #BlackLivesMatter, or the out-of-control police-industrial complex.

Black people feel like they’re being targeted because of the color of their skin. There’s historical precedence there. And the last two shootings don’t appear to be guys who were engaged in criminal activity.

The police were targeted because they were police. Twice in a very short period of time.

And the Orlando slaughter was at a gay nightclub.

The current tidal wave of shootings is the result of the most extreme version of viewing others differently, as less than worthy or fully human.

A little more than a week ago, my Facebook feed became a giant food fight of people who knew exactly what was wrong with the country and the world and were ever more certain about the cause and the cure.

The cause, of course, was them, and the cure was beating them into oblivion.

A few days before that, I talked to someone who knew a couple of the victims in the Pulse shooting. Today, I read an account about some of the survivors. This isn’t politics to these people. It’s not a vehicle to get Secretary Clinton or Donald Trump elected. It’s not the latest episode of 24. It’s a relentless, ongoing tidal wave of guilt, disbelief, grief, anger, and disillusionment. It’s something I can’t imagine. I expect you can’t, either.

The Pulse club wasn’t just a bar or a nightclub, according to accounts. It was a place where, as the song goes, everyone knew your name. It was a place people drove hours to spend time.

And it’s shattered. Obliterated. A throbbing open soul wound too big to measure or comprehend.

On Friday, a friend of mine IMed me. A family member was going to see something at the Straz Center in downtown Tampa, mere blocks from the courthouse that was supposedly a focus point of Anonymous’s Day of Rage protests. My friend was worried if it was safe.

As it turned out, it was safe. Almost everything still is, but the doubts are always there.

We’re told that when we’re out, we should pay attention to the exits and keep track of what’s around us. Eternal vigilance isn’t just the cost of liberty any more, it’s the way to stay alive.

Against that backdrop, rage is understandable. It’s human. Maybe it’s even partially justified.

But that doesn’t matter.

And they’re just adding to the noise.

At the risk of sounding annoyingly self-righteous, it’s not noise we need.

Unity doesn’t mean I agree with you. It doesn’t force me to see things your way or vice versa.

It means I hold my hand out to you and give you an opportunity to take it, if only just for a second.

It also means that I give you the opportunity to slap my hand away and scream at me, sure that I’m part of the problem and not the solution.

It’s hard to hold a hand out to people who might scream at you.

We need people who make it a priority to do the hard thing.

Leave a comment | posted in culture wars, life philosophies and other esoteric crap

A second chance for Jose Reyes?

I don’t know Jose Reyes. I’ve never met him. My team, the Mets, re-signed Reyes and today they promoted him to the big club after his former team, the Colorado Rockies, released him.

Reyes was a force with the Mets his first time around, a difference maker. He ran like the wind, fielded well, hit well, and applied pressure to the game whenever he was in it. The Mets, who needed to shed payroll, allowed him to leave as a free agent immediately after he won a batting title in 2011.

As Reyes bounced around, first with the Miami Marlins, then the Toronto Blue Jays, then the Colorado Rockies, his skills deteriorated. Last Halloween, Reyes allegedly grabbed his wife Katherine Ramirez by the neck and shoved her into a sliding door, injuring her neck, side, and wrist. Reyes was arrested on misdemeanor charges, and those charges were dropped after Ramirez opted not to return to Hawaii to cooperate with prosecutors.

Reyes was suspended by baseball commissioner Rob Manfred for 51 games without pay to start the season. The Rockies, who found another shortstop during Reyes’ suspension, effectively released him when the suspension was over. When the Mets, who badly need infielders, signed him, it was a smart baseball move. Reyes may not be the player he was, but the Mets are paying the league minimum salary–the Rockies pick up the rest. And he can’t hurt the team.

Of course, the baseball terms aren’t the only terms. The charges against Reyes were dropped only because the person he assaulted refused to cooperate.

This isn’t Ray Rice beating his fiancee (now wife) in an elevator and dragging her unconscious body out. This is a misdemeanor. Reyes isn’t in the same weight or size class as Rice. But it is domestic assault. And it was serious enough for Reyes to miss a third of a season, and for the players’ association to accept the suspension.

For his part, Reyes sounds contrite. “You have to learn from the mistakes. I did everything possible that MLB told me. I paid my suspension. I went to counseling, and I’m going to continue to be open to doing that — to be a better man, a better husband, a better daddy in the house and stuff like that, a better teammate.” I guess we’ll see.

So it comes to this: at what point, if ever, does someone like Jose Reyes earn another shot? He’s a professional athlete who appears to have physically abused a woman. He wasn’t convicted. It was a misdemeanor.

Part of me says that if you close the door forever on guys like Jose Reyes, you discourage people who know they have a problem from getting help before it gets out of hand. Another part of me says that he’s a professional athlete and that means his body was honed to perform. The same cannot be said about his victim.

In my mind, Reyes deserves another shot–and an incredibly short leash. The burden of proof is on him. And at the first hint of impropriety, a far more severe suspension should be assessed.

And the problem with that is if I’m wrong, the cost to Reyes’ victim next time could be much, much higher.