In defense of just being

Each morning for the past three and a half years, I’ve tried to think of something to be thankful for and posted it on Facebook. In the beginning, it was hard. Things were bad. It was November of 2015–a year I celebrated by drinking champagne purposely before midnight. I didn’t care about the new year. I was just glad the old year was over. So sometimes I struggled to find something to be thankful for, and that was the point–to change my mind.

There were a lot of days early on when I posted that I was just thankful for existing–and that’s because I couldn’t think of anything else to post and I had to post something.

This morning I made the same post. And it’s not because I couldn’t think of anything. I have a good house, a good family. I get to work at home. Inside. We’re relatively comfortable materially.

But this morning, I got up. I got the laptop and put it on the table. I made and drank coffee. I did all of these things because I wanted to. Before, in 2015, there were mornings where it was hard to get up. Where making coffee was something I had to rest during. When I jury-rigged a laptop to a tray so I could work in bed. So all of the things I listed aren’t assured. Waking up isn’t assured.

There is value in existing. Sure, it’s table stakes, an entry point. But it’s also a gift.

It’s something that you take for granted because it’s there every day. But it’s finite and valuable, too.

Today I did my second resistance workout in, like forever. P90X3, the Challenge. It’s pushups, it’s pull-ups, it’s all that.

My tally: either 73 or 76 pushups, 16 on my knees. And exactly–wait, I need to check the tally here–yes, exactly 0 pull-ups. I cheated, using a stool and doing partial little baby pull-ups.

To be clear, I have done workouts in the past where I’ve done about 260 pushups and I used to be able to do 11 or 12 pull-ups at a rip. Then life happened. I got sick, I had a long, super-annoying run of injuries, I got lazy. Some of the stuff was self-inflicted. Some wasn’t.

In a previous life (read: maybe a month ago), I might’ve beaten myself up for the fall-off. I would have opened the spare closet where all my skinny shirts are–shirts I looked damn fine in, if I have to say it myself.

Not today. Today, I did the workout and didn’t push too hard. It’s been a long time and I don’t want to walk around for the next five days looking like the tin man stayed out in the rain and didn’t have any joint oil.

And that was enough. The key to success is, as the great master Tony Horton says, is just pushing play. Show up, do the workouts and progress will come. And it’s that progress, not the fact that I’m a Jabba-like slug, that’s the key.

So doing the workout, whatever it is, is the win. Even if you don’t do much.

Same with everything else. Play the game, do your best, and let the chips fall…

On one level, the tag is directed at Mike Pence for his reaction to a tour of the detention facilities along the Mexican border. More broadly, though, it’s intended for Christians whose actions and positions make the a hypocrite–the biggest possible sin in America’s social media era.

I can’t speak for VP Pence’s heart–and wouldn’t speak to the heart of anyone who professes to follow Jesus, from Pence to the Rev. Richard Rohr, the closest thing to a Christian anti-Pence I can think of. There’s this thing about specks, logs, and eyes in the Bible.

To paraphrase whoever wrote that specific episode of The Simpsons, I’m an old man. I hate everything except Matlock. And I hated that, too. (Magnum, PI, the real Magnum, PI, was better. I hate that fake one as much as Matlock.)

According to Christian theology, Jesus is the name at which every knee shall bow and every tongue confess. It’s a valuable name. It’s a name that shouldn’t be bandied about like other names. According to our current church series, as followers, we’re to make Jesus’s name famous in all the right ways. At this, I suck. There are people who don’t suck at it. I know a good number of them. But if you’re looking for the heart of Jesus in me, you’ll be disappointed.

There was a time when the WWJD bracelets were popular and for quite a while I wore one. But I stopped because if you looked at me, too often you could figure out what He would do by playing the George Costanza opposite game. So I took it off and haven’t put it back on.

I’m just a guy doing my best and falling short too often. It’s not complacency. I’m not perfect, and my forgiveness is solely the decision of the Father I try to follow. It’s not mine to claim or lean on. I am fully dependent on Him for grace and whatever love he happens to shoot my way.

This isn’t self-immolation; it’s just truth. My only hope is love, and it’s something I’m not good at.

In John’s Gospel, there’s a scene where all the Holy Men™ bring a dirty whore in front of Jesus. She’s clearly a dirty whore and doesn’t deny that she’s a dirty whore. And the holy people, Jesus and the other holies, are within their right to throw rocks at her until she dies. 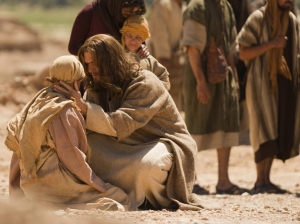 Jesus passing righteous judgment on the immoral woman. And anyone in that role.

The problem is, everyone is, to some degree or another, that whore. Everyone sells their souls for something at some point. And like the parent of a wayward teen, Jesus and God come and bail us out for our foolishness. Because he loves his children, even when they miss the mark.

Epstein accusations should not be a surprise

It shocked me, really. As a young radio newsguy, one of my jobs was to call the local police agencies each night and ask if they had any news to report. There was nothing thrilling–no serial killers, so famous arrest, no news-worthy scandals.

Check that–there was one newsworthy scandal, but to my young mind, it was a series of aberrations. More often than I figured possible, people were arrested for sexual conduct with minors. Usually, it was men–typically between the ages of 40 and 55, if memory serves.

Then time went by. Howard Stern used to irritate me by talking about priests molesting boys. As a Good Catholic™, I thought he was being unfair. Anti-Catholic. After all, I did Catholic stuff all my life, even went to a Catholic High School. Surely if such things were going on, there would’ve been a least a whisper.

But there was nothing. No one I knew spoke of this.

And then the scandal broke. To this day, I’m pretty sure I don’t know any priests who participated. But I’m much less certain than I used to be.

It’s not just Catholics. It’s teachers–seemingly more female than male. It’s actors–and even though Kevin Spacey might wiggle out of his current legal woes, Family Guy referenced his behavior in 2005. Coincidence? Maybe. I tend to believe not.

And that brings us to Jeffrey Epstein. Right now, the big names associated with him are Bill Clinton, Donald Trump, Prince Andrew, and Alan Dershowitz. It’s too early to know for certain which of them–and which other men (and maybe women) of influence are involved, and which were just friends with the wrong guy.

But it’s not too early to believe that this is largely true, and to pause before condemning actors, athletes, or singers who crash and burn at a young age. Even in today’s more-open society, the people who abused them, or allowed the abuse, are still powerful. And being the victim of a sexual predator is still deeply personal and embarrassing.

Maybe this isn’t as big as it looks like it could be. I suspect it’s better. And that even when the investigation is over, other powerful people will avoid detection. If it was done in Glens Falls, New York by relatively powerless men, you have to know it’s being done even more by men (and maybe women) with power.