I’m a Republican. I have been since my 18th birthday, more years ago than I care to admit. Among other things, I believe in border security, limited government, and freedom of expression. I believe gay people should have the same right to marry as straight people. And I believe that bakeries should be allowed to refuse to make their cakes, then take their chances in the free market.

I also believe in the second amendment.

In the picture below are my children. Only they aren’t children any more. 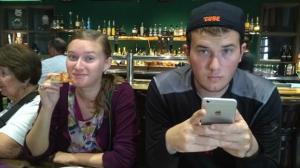 The woman on the left is Jennifer. She’s been working since sixth grade to make the most of her God-given talents. She was the best student in her International Baccalaureate middle school and the validictorian of her IB high school. She graduated from George Washington University Phi Beta Kappa. She spent a year in the Marhall Islands helping kids learn English. She’s now a doctoral student at UCLA. She wants to be an academic.

Since sixth grade she’s worked harder than anyone I’ve ever known to make her way in the world. I love her more than my words here can convey.

The guy on the left is Daniel. He currently attends Syracuse University. He’s worked hard, too, but in a different way. His life is chaos. He’s always working on something and he’s on track to graduate a year early from school. He’s a little surly sometimes, but he’s quick and witty and has a touch with people I’ll never understand. And I love him differently, but every bit as much.

For reasons I won’t pretend to understand, you went on Alex Jones’s radio show and called for the murder of my children, among other people.

If you were just some random nut case, I’d chalk it up as stupidity and move on. But you aren’t a random nut case. You’re on the Board of Directors of the National Rifle Association. You consider yourself a spokesman for people in the party I’ve always belonged to.

I didn’t vote for Hillary Clinton–a fact that caused strain in my relationship with my daughter for a while. And now a growing part of me wishes I had, because President Trump’s reckless, unpresidential public persona has encouraged people like you to say things like “There are rabid coyotes running around…every time you see one, shoot one.”

In the context of your remarks, you’re referring to Democrats, academics, media, and RINOs (Republicans in name only). I guess under the First Amendment, you have as much right to spout this horrific drivel as the Westboro Baptist Church has to show up and make asses of themselves at high-profile funerals.

But, Mr. Nugent, in your remarks, you called for people to shoot my children, along with approximately half of the rest of the country. Some of those people are very close friends of mine and better people than you could ever consider being.

You can have whatever political positions you want to have. And that’s as it should be.

But if one of your hair-trigger followers even considers harming my children because of your words, the so-called fake media will be the least of your problems. I will make it my avocation to make sure every second of your life–and I truly hope it will be a long one–will be filled with the realization of the effects of your reckless, ill-considered, murdrous words.

These are human beings, not some imaginary vermin you can put out of their misery and out of your mind. These are God’s children you want put down like a rabid dog. And two of them are my children.

I hope common sense will prevail and you will reconsider and denounce your words. Failing that, I hope the NRA will remove you from its board and rescind your membership. And should the worst happen to anyone. I hope the riches that you’ve worked for decades to attain are paid out as a poor, inadequate recompense for the cost of your verbal poison.

The God I believe in will surely forgive you for your words, should you ask it, and I’m happy for that. But my soul and my logic are weak where my children are concerned.

Chris Hamilton is a writer trying to make the next step, to go from pretty good to freaking outstanding. He's devoting himself to doing the work and immersing himself in writery pursuit. He also hasn't quite mastered this whole Powerball thing, and still has a pesky addiction to food, clothing, and shelter, so he has to work, too. Blech. END_OF_DOCUMENT_TOKEN_TO_BE_REPLACED
This entry was posted on Sunday, April 8th, 2018 at 1:53 pm and posted in culture wars, God stuff, life philosophies and other esoteric crap, political crap. You can follow any responses to this entry through the RSS 2.0 feed.
« The fat guy you see running
Thoughts and Prayers and Utes »